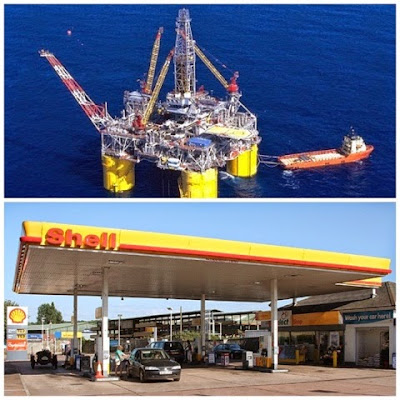 As a Shell "lifer" - more than forty years if you include my time as a Director of the Pension  Fund - I cannot recall a bigger strategic shift than the acquisition of BG. It offers the Corporarion a unique opportunity to do what Tom Peters called "stick to its knitting" - to concentrate on what it's really good at.

BG is an "Upstream" company. It only does exploration and production of oil and gas. And that is what Royal Dutch Shell (RDS) is good at too. To the man or woman in the street it is the Shell emblem standing over a Shell petrol station for which it is best known. But over the years this part of the business - never, in truth, that important to the heavies at the top - has declined in importance. The "Downstream" - the refining and marketing of oil, gas and chemicals - is pretty much cast adrift from the Upstream. The engineers, geologists and accountants in the highest echelons of Shell never really understood it anyway! There are no longer any economies of scale from being involved in oil from wellhead to petrol pump, if there ever were.

In the last period of my Shell career the start of a major centralisation of business occurred. The power of the national "Operating companies" (OpCos) was severely curtailed. Most of these were marketing companies and there was a presumption, based on profound ignorance, that they could be managed centrally in the way that the Upstream increasingly was.  Those arguing the indisputable truism that "All Markets Are Local" we're not listened to and numbers on the ground in the OpCos were drastically reduced and their autonomy was destroyed.

The Downstream was an uncomfortable mix of Refining - an asset rich highly technical business - and Marketing which if done well has to be customer driven. Once, perhaps, to market oil oil products you did need to refine them. That hasn't applied for a long time. Shell no longer has any refineries in the UK but still has a significant marketing business. The same applies to many Shell operations around the world.

Over the last decade or more Shell has pulled out of the Downstream in many countries - in some cases franchising the brand to a separate business Independently managed and neither Shell owned nor controlled. This reduces assets employed, whilst maintaining a visible brand presence. There is nothing wrong in principle with this model - MacDonalds and other fast food businesses do it - but it has to be tightly controlled. Especially the brand. I very much doubt that the Board of RDS spends any time on these matters - the huge Upstrean business occupies most of their time. And when it comes to investment the priorities are also overwhelmingly Upstream.

The purchase of BG merges a significant Upstream operation into RDS's already huge one. All of top management's attention in the next few years will be on making this work. In these circumstances the Downstream would be an uneccesarily distraction. There is an overwhelmingly strong case for splitting the Downstram away as a totally separate stand-alone company which would focus entirely on marketing the brand to customers around the world. Oil Trading and Chemicals would also be part of this new Shell company. It would be separately traded as a FTSE company and entirely disconnected from the Upstream of RDS. The new company would take the "Shell" brand while the Upstream would be renamed "Royal Dutch". Easy !

I would guess that there are a few people in BG who know all about demerger. Remember the old British Gas was a vertically integrated company, like Shell, doing everything from exploration to selling Gas to the end consumer. It was split into two back in 1997 when the brand name "British Gas" went to the UK marketing company (owned by Centrica) with the Upstream business being renamed BG. Shell has the opportunity to do the same now and there are sound reasons for doing so.