There is no case for keeping steel production open in Redcar 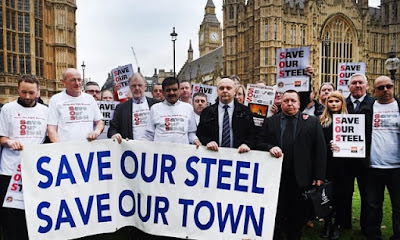 Steel is a commodity. This means that producers must mainly compete on price. As with all commodities there are opportunities to add value on the margin with enhanced products or services for special applications. But the vast majority of steel use is of materials that meet a common specification and are undifferentiated. So any buyer of steel issues tenders and chooses a supplier who offers delivered materials meeting an agreed specification at the lowest price.

In the modern world the trading of commodities is international and even bulky items like steel can be transported over large distances economically. This means that the global market will be dominated by the suppliers with the lowest production costs who can as a result offer the lowest prices. 'Twas ever thus. The decline in textile manufacturing in the UK (for example) was because others in lower labour cost countries could offer lower costs. And with free trade and the removal of tariff barriers there is nothing we could do about it, and didn't.

So is steel production in Redcar (etc.) a lost cause? Almost certainly. Should the British government subsidise British steel to keep plants open? The only instance where this might be justifiable would be if the present steel market conditions were temporary and some sort of bridging arrangement was necessary. The does not appear to be the case.

The closure of the mines in the 1980s was crassly and insensitively handled, but the strategy was right. The UK could not compete with lower cost coal producers and the energy sector was moving away from coal anyway. There is a parallel with the current state of affairs in steel. The U.K. can be a niche producer of added value steel products, but not a competitive producer of commodity steel. So Government's task is not to shore up unviable plants but to find a way of softening the blow for those thrown out of work. It's a tough conclusion but there is no other one.

I was sitting in an expat residential compound in Riyadh on one of my many trips to Saudi Arabia some fifteen years ago. My host was the ex-pat head of Shell in that country and he was hospitably ensuring that I and the other guests had what we wanted to drink. Beer, spirits, wine were available without any restrictions. Inside the compound! The details of how it all got there I can’t remember but any ex-pat would know the sources and how to ensure that thirsts were always quenched.

I got quite close to one of the more urbane Saudis who worked with us in Riyadh. He invited me to his home and there I met his wife – a beautiful young woman who behind the walls of their house wore high fashion clothes and acted just as any woman in the West would act. The two of them were generous hosts and insisted that I tried a particular Malt Whisky – a Macallan as I recall. There was a seemingly unlimited choice of other spirits as well. This friend told me how it worked. “Did you know”, he said,  “that the Kingdom is the world’s largest consumer of Johnnie Walker Black Label?”. I’ve no idea if this was actually true but maybe it was. The supply route was explained to me. One of the members of the House of Saud, the ruling family, (there are a lot of them), had the Johnnie Walker “concession” and arranged both the (illegal) import and the (equally illegal) distribution to customers. This was matched for all of the rest of the high quantities of alcoholic drinks that the country consumed.

The home manufacture of alcohol by ex-pats in their compound homes was also common. They would brew beer, make wine from kits and some even had a still to make hooch. This was partly because the imported real thing, though available, was expensive. Mr Andree was apparently arrested for transporting a quantity of homemade alcohol. He was caught by the “religious police” – perhaps there was a particularly tough officer on the case. In general the Saudis turned a blind eye to what was going on so long as it was not “in-your-face” - and they rarely if ever went into an ex-pat compound.

Nothing is ever quite what it seems in this corrupt and bribery-ridden country. Maybe the arrest and imprisonment of Mr Andree has more to it than it seems? He has apparently lived in Saudi Arabia for the last 25 years, “developing and managing a number of locally owned oil companies” and that will have at times, no doubt, have  placed him in difficult personal positions in a sector where there are many rivalries. Has he fallen foul of somebody who wanted revenge – or at least for him to be out of the way? Who knows, but a man who has lived in the Kingdom for so long is unlikely not to know the rules and to have found subtle ways around them.
Posted by Paddy Briggs at 11:19 am 1 comment: