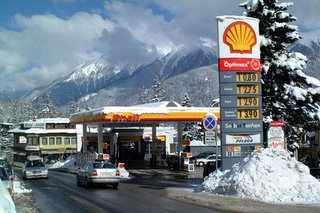 One of the best loved learning methods of Business Schools is to use case studies to illustrate good or bad practice that students can draw lessons from. These cases are either real (sometimes with the names changed to protect the guilty) or fictitious (but with a good dash of reality thrown in). If you wanted to write a case study to put forward a story of a badly wounded brand today you could do worse than to prepare one about the troubled oil giant Shell. Over the last few months Shell has rarely been out of the headlines as further revelations have emerged about its failed decision-making and its deceit at the very top. Three of Shell’s most senior executives (including the chairman) have been fired or pushed aside and the trauma that has followed has inevitably affected managers at all levels and in all of Shell’s businesses. But it is to those responsible for the Shell brand and reputation that we would expect to turn to find the emergence of a strategy which will lead to a recovery of Shell’s once strong position in the petroleum sector.

To most consumers Shell is, of course, best known as one of the great petrol station brands – the largest operator world-wide in this sector and with a reputation based not only on its omnipresence (in more than 120 countries) but its innovation. For example the partnership with Ferrari has conferred technological distinction on the brand which has been well exploited by the development and marketing of its award winning “Shell Optimax” differentiated petrol offer. Given this recent background you would assume that the recovery from Shell’s current difficulties would be brand led – building on the historic underlying brand strength to re-establish Shell’s reputation for leadership and for managerial competence.

Shell’s marketing organisation is located within a management structure called “Oil Products” which covers all of its “downstream” business (“downstream” means that part of the business which refines crude oil into useful products and distributes and markets them to consumers). The head of the “Oil Products” business is a Dutchman Rob Routs who was previously head of Shell’s United States business and who oversaw the unscrambling of the disastrous Joint Venture with Texaco in America. Marketers in Shell and outside would think that that experience would have taught Routs of the key added value that the Shell brand can give – if properly managed. It is all the more surprising, then, that Routs’ first significant action and communication since taking over the leadership of Shell’s marketing businesses is all about organisation and process – and that the Shell brand does not even get a mention in it!

On 17th May all of Shell’s “Oil Products” staff received a communication of more than 1000 words from Rob Routs which not only failed to mention the Shell brand but also ignored the fact that Shell has recently experienced a period in the public eye during which its reputation had been badly tarnished. Many observers would feel that the reputation damage has been a PR disaster of such enormous magnitude that the principal focus of Shell’s marketing businesses for some time to come should be to rebuild the brand. But what Routs has launched under the descriptor “OP-One”, and which purports to be a new “strategic plan for Oil Products”, is not built at all on this reality. The driver for this new plan is not a realisation that the Shell brand is mortally wounded, but a regret about being “out-performed by ExxonMobil and Total in 2003 on earnings per barrel” and a concern that the overall return on capital employed of Shell has “languished well below shareholder expectations” and that the organisation is “complex and costly”. The key metric here is to do not with customer satisfaction, even less with brand strength, but with shareholder perceptions. Ironically it was this focus which led to Shell’s recent difficulties in the first place. The valuation of Oil reserves, and the failure to disclose early that there had been an over-estimate of these reserves, was largely attributable to a wish to be seen by shareholders (or rather by their proxy representatives the financial analysts) as performing well (even though the reality was different).

Shell’s new strategy seems once again to give the shareholder stakeholder pre-eminence over the many other stakeholders that Shell’s marketing businesses serve. The customer only gets a mention in respect of the perceived need for “processes and policies to make interaction with our customers simpler, more consistent and more effective” and for the creation of an “organisational model focused on servicing our customers through customer-friendly processes and systems”. The need to provide greater customer satisfactions in respect of better products and the improvement of the purchasing experience (e.g. at petrol stations) is not covered. And, as we have seen, the overall imperative which most marketers would expect to see - the need to restore confidence in the Shell brand and to release again its underlying strength - gets no mention at all!