GREENWASH – The drama and the reality

“He’s a PR man. For an oil company. That’s bottom of the list!

Michael in “Greenwash” by David Lewis

I have just been scanning through the last seven editions of “The Economist” newspaper – and as always it’s a very good read. And in these troubled times it is arguably an essential source to inform about what really might be going on in the world. The pointers to today’s realities come from The Economist’s excellent but anonymous correspondents, the letters and especially for the advertisements – or at the moment the lack of them. The good news is that the “Greenwash” ads, which featured strongly in the newspaper until recently, have vanished! A year or so ago, and for some years before that, upmarket print media was full of mostly disingenuous corporate advertising from oil and energy companies with a common theme. In short Shell, BP, Total, Chevron and even ExxonMobil wanted to convince their “special publics” (as Shell called us) that they were public-spirited companies. In particular the message was that they had a unique contribution to make to the resolution of the world’s energy problems – global warming and all that. A common message was that the “proof” that Shell and the rest really cared was their alleged commitment to not just their traditional oil and gas businesses but also to a whole raft of non-traditional energy initiatives such as renewable forests, solar, wind, hydrogen and the like. It wasn’t just former oil company insiders like me who were sceptical of these claims – all the NGOs and most of the other proponents of Renewables saw through the chimera and christened it “Greenwash”. 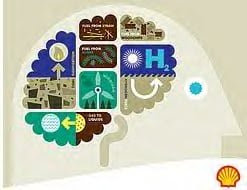 The tiny “Orange Tree” theatre in the London Borough of Richmond–Upon-Thames has a justified reputation for putting on original drama – both revivals of forgotten classics and new writing. In the second category we have recently seen David Lewis’s new play “Greenwash” a satirical and very funny demolition job on the PR industry in general and the oil industry in particular – hence the title. The hero of “Greenwash” – or rather the anti-hero – is Alan a middle-aged PR consultant working for a company which sounds very like Shell! “We’re working with the realists and isolating the radicals. That’s accepted strategy! You have to divide them up! If you’re simply confrontational, you just unite them, make them more powerful!” he says talking about his company’s approach to the NGOs. It rings true. Shell, for example, would from time to time cuddle up to NGOs like “Friends of the Earth” whilst distancing themselves from Greenpeace. A divide and rule tactic which worked exactly as Alan suggests that it does.

The mantra chanted by Alan and his like is that managing opinion and reputation is all about managing perceptions. Sure you might need to modify some of the grosser excesses in your business or in your behaviour but in the main you carry on doing what you have always done and carry on doing in the way you have always done it – you just present it in a more palatable way. It’s a bit like a politician saying that they better “get the message across more clearly” – much easier than actually changing what they do. And this is where the Greenwash advertising comes in. Shell’s business, and that of all the other Oil majors, was 99% about exploiting hydrocarbon resources. That’s what they do, what they are good at and what in truth they expect always to do in the future. Shell in particular was hopeless at diversification – only the Petrochemicals sector (itself of course based on hydrocarbons) has survived as a significant business which isn’t directly oil and gas. All the rest, from Nuclear to Metals to Forestry to Agrichemicals to Power Generation have gone. Shell couldn’t (or wouldn’t) make them work. But, so went the argument, Renewables was different and Shell was prepared to put its money where its mouth was.

Take Wind Energy. Back in 2006 Graeme Sweeney, head of Shell Renewables, said that the giant offshore wind project known as the “London Array” would provide a “major breakthrough in the UK low-carbon energy mix”. Shell was part of the consortium that wanted to build the array and was awaiting a planning decision later that year. 'A positive decision would be a clear signal that a substantial contribution could be made by renewable energy if we could all drive this through to a successful conclusion” said Sweeney at the time. A year ago Shell pulled completely away from this project and more recently we have seen an announcement that Shell is pulling out of investments in all renewable technologies (wind, solar and hydro power) completely because they are “not economic”.

There was never a proper balance between rhetoric and reality. The advertising that extolled Shell’s commitment to Renewables in The Economist and in similar publications around the world was clearly designed to deflect criticism that Shell was an old-fashioned smoke-stack loving corporation whose principal business was exploiting the planet’s depleting oil and gas reserves. One TV commercial promoting Shell’s Renewables commitment even said that “One Day it may be our biggest business”. It was bullshitting Greenwash when it appeared and many of us who knew this said so at the time. But Shell was impervious to criticism and this disingenuous corporate advertising continued until quit recently. Shell’s recent virtual withdrawal from the Renewables sector shows what a shameful sham all this was.

Alex Carey quoted in "The Public Relations Industry's Secret War on Activists" said that the “20th century has been characterized by three developments of great political importance: the growth of democracy, the growth of corporate power, and the growth of corporate propaganda as a means of protecting corporate power against democracy." Multinational corporations are subject if not to democratic processes at least to judgment by the media and to revelations by honest activists who seek the truth through all of this propaganda. Despite their almost unlimited budgets and the ability they have to employ PR professionals like Alan in the play “Greenwash” to tell their lies for them eventually hubris will catch them out. Shell was arrogant enough to think that they could present their miniscule and largely irrelevant Renewables business as significant. It wasn’t - but that didn’t stop the Greenwash claiming that it was. And now that the deception has been revealed can we expect an apology and a commitment to tell the truth in the future – don’t bet on it!
Posted by Paddy Briggs at 9:59 am No comments: