Alastair Campbell on the Oil Companies in Britain

Crisis management and the Oil Industry


At a recent event with Alastair Campbell – formerly Tony Blair’s Press Secretary and chief spin doctor – he discussed (inter alia) crisis management. One of the crises that he talked about which happened in September 2000 in Tony Blair’s first term was the protests by haulage companies about fuels prices. The crisis involved 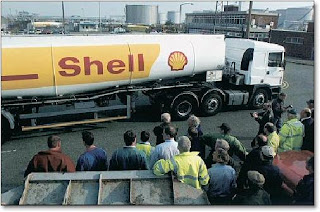 the blockading of fuel facilities (refineries and depots) and very nearly brought the country to a grinding halt. Campbell described how the crisis was handled at Number 10 and elsewhere in the Government apparatus. When asked about the role of the oil companies, including Shell and BP, Campbell said that they were “hopeless” and showed a complete lack of leadership retreating completely from the fray. Campbell commented that he felt that this abrogation of any responsibility in the matter was particularly shameful given the excessive salaries that top executives in the oil industry paid themselves!

In Campbell’s diaries (pages 471ff) he describes a meeting with the “oil company executives” and describes them as “…not a very pleasant, compelling or impressive group of people” and specifically that “…the BP and Shell people were not impressive. I guess part of them was happy for this to be seen as a government problem…the guy from BP said that he was worried that they would be left holding the baby.” Later as the crisis began to be solved the Prime Minister called the oil companies in again. Here is how Campbell described that meeting:

“TB [Blair] said he wanted to read the riot act because he wasn’t happy with their systems, and didn’t really feel that they had pulled out the stops. Mark Moody-Stuart [chairman of Shell] was dreadful. He had earlier asked if TB minded if he sent his deputy. Yes he would was the answer. It was pretty tense at time, not least when JP [John Prescott] had a go at their contracts system.”

I think that I can throw some light on this matter from my own experiences in Shell (although I was not working in the UK at the time of the fuel crisis in 2000). Sixteen years earlier (in 1984) I had been responsible, as a member of Shell’s executive team in Scotland, for the management of the company’s commercial/industrial business in that country. Shortly after taking up my appointment the miners’ strike hit the United Kingdom – Scotland was one of the hardest hit areas. One of the issues that I had to deal with was in respect of the Ravenscraig plant of British Steel. If the furnaces at Ravenscraig did not get coal then they would shut down and could not be restored again. Ravenscraig would have to close. The normal supply route to Ravenscraig for coal was by train directly to the plant, but the rail unions, in sympathy with the miners, refused to move coal supplies. So the only solution was to have dozens of trucks on a permanent journey from a coal import port at Hunterston on the west coast of Scotland to Ravenscraig – a journey of some sixty miles. Shell’s interests were twofold – Ravenscraig was a huge customer, the largest consumer of Shell lubricants in Europe. And the haulage company running the coal supply trucks was a Shell customer as well! But there was clearly a problem – on the one had we did not wish to be seen as taking sides in the miners’ strike which was the hottest political issue of the time. On the other hand we had a duty to look after our customers and, as a long established business in Scotland, most of us also felt a sense of duty towards the thousands of people who relied on British Steel (and their suppliers) for their livelihoods. With the consent of my bosses in London the action that I and my colleagues took was to approach the Transport Union (TGWU) and ask them whether they would sanction our continued supply of diesel fuel to our customer – the road haulage company involved. I had a long meeting with the TGWU shop steward and we came to an agreement – it was, of course, a very difficult decision for this official as on the one hand he was instinctively in support of the miners but on the other he also had a duty to his members (Shell’s drivers) and to our customers. Anyway we kept fuel supplies going and Ravenscraig was saved.

The key point of the Scottish story and its relevance to the situation sixteen years later described by Alastair Campbell was that back in 1984 we had staff on the ground at a reasonably senior level to help resolve this crisis. Also the drivers were our own staff and we genuinely worked together as a team. By 2000 most of this had gone. Shell had cut back its business to such an extent that only junior staff would have been at the fuel facilities that were under siege. And these staff, unlike my colleagues and me back in 1984, were not empowered to act. Further the drivers and other staff were no longer Shell employees and had no loyalty to Shell. All delivery of Shell fuel in the UK had been contracted out to haulage companies – the very ones, no doubt, also involved in the protests against the government - John Prescott was quite right to “have a go at the contracts system”! In the Thatcher/Major years Shell had ruthlessly eradicated the unions from its UK operations as well – so there were no Shop Stewards to talk to either. Finally Moody-Stuart, although Chairman of Shell Transport and Trading at the time, would have had little or nothing to do with Shell’s downstream business in the UK. Shell UK once a fairly large and independent operating arm of Shell was by the year 2000 neutered, moving out of its offices at Shell-Mex House and losing its independence and focus. Regional offices, such as the one I worked from in Glasgow back in 1984, had long since closed. Although there was a figure-head Country Chairman he had little or no line authority and the sort of bias for action that we saw back in 1984 was entirely absent. There was nobody to pick up the ball and run with it. 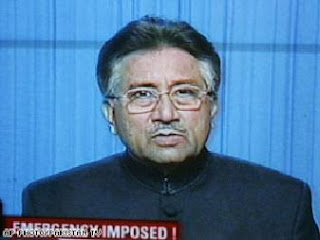 operation. So as the eyes of the world are on Pakistan at the moment and we are all asking whether the livelihoods and security of the millions of innocent citizens in that benighted country have been better protected by General Musharraf’s “second coup” it is also reasonable to look at the response of the many multinationals operating there particularly those, like Shell, which have boasted a commitment to Human Rights.

The imposition of virtual martial law in Pakistan has been condemned by the respected “Human Rights Commission of Pakistan” as well as by opposition parties, lawyers and other Human Rights groups in the country and abroad. So in the circumstances what do corporations, like Shell, say or do? Clearly an over precipitate reaction would help nobody but if, as is likely, the restrictions on opposition and the suspension of legal restraints on Musharraf’s Junta continue, and all democratic processes are suspended, can a company which has so openly embraced Human Rights credibly remain silent?

Words are cheap and of no value unless they stand for more than just self-promoting hype. Shell Pakistan is a significant player in that country’s energy sector and has declared that it has “Business Principles” which are to: “… conduct business as responsible corporate members of society, to comply with applicable laws and regulations, to support fundamental human rights in line with the legitimate role of business, and to give proper regard to health, safety, security and the environment”. So what will Shell Pakistan do or say now that “fundamental human rights” have been suspended? If it is argued that for commercial reasons they should do nothing then one must question what the point of the Human Rights commitment was in the first place. There is no obligation on Shell in Pakistan, or anywhere else, to make a Human Rights commitment. But if they have chosen to do so it is reasonable to ask what this really means when political circumstances change so radically that individuals’ freedoms are threatened – as is presently clearly the case in Pakistan.