The day we demolished a childrens' playground... 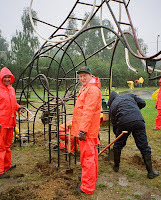 I’ve told this story before – but ten years on it may be due a retelling! Back in 1998 Shell was going through a top down generated change management process. This one was called “BFI” but I can’t for the life of me remember what the initials stood for. It had two main elements. The first was about measuring the business and trying to improve performance. The idea was that you “drilled” down to examine the business in minute detail to try and find your business strengths and weaknesses. Where did the money come from – or where did it go. It was a bit dull and a bit accountant led and rather micro in scale - but it wasn’t totally daft. The totally daft bit came from the other part of BFI.

We were supposed to bond better by revealing our feelings and aspirations as individuals - one member of one of the groups I was in was a Managing Director of Shell (he is now Chairman of a very big company). He removed his tie (the first time anyone had been him without neckwear in an office) and shared with is how his marriage had been in difficulties when he was GM of a Shell company years ago. Curious stuff and rather embarrassing. Anyway to bond us all better as a unit we had to go into the community to do “good works” one afternoon. The good works in our case involved the demolition of a perfectly good childrens’ playground in a small town in Holland. The playground had recently failed an HSE Test (although it looked pretty good to most of us). So it had to go. Quite why a group of middle and senior Shell executives had to demolish it I to this day have no idea.

It was a dreadful day – pouring with rain throughout and the playground resisted our efforts to reduce it to rubble. The swings and roundabouts were cemented hard into the ground as were the slides and the other play things. One of my colleagues, who was from Nicaragua, said that if the playground had been in Managua it would have been by far the best playground in the city. But here in Holland it had to go – and we had to send it on its way. It was an utterly pointless even offensive thing to do. Most of us were not in the first flush of youth and certainly unused to too much physical effort (away from a golf course bunker that is!). And the pouring rain drenched us all and turned us from puzzled to angry – as well as wet. Did this farrago achieve its objective – did we bond better as a result. I very much doubt it. Did our opinion of senior management increase at the end of this utterly senseless day – what do you think?
Posted by Paddy Briggs at 8:53 am 1 comment: