Shell's non-executive director's failure of his duty of care 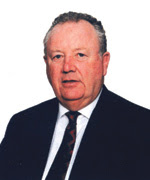 The British Institute of Directors says that "…the non-executive director's role is to provide a creative contribution to the board by providing objective criticism." Well "objective criticism" was distinctly absent from the non-executive directors who appeared at the Annual General Meeting of Royal Dutch Shell plc this week. To be fair Jorma Ollila, Shell's Chairman, handled the meeting skilfully, although he rarely ventured into comments about the business. But the others were either almost completely silent or, in the case of Sir Peter Job (right), seriously inept in what they said.
Maarten van den Bergh, a former Managing Director of Shell of course, must have struggled at times to hold his tongue as his erstwhile colleagues sometimes floundered or were particularly 'economical with the actualité' And Lawrence Ricciardi might wonder about his one contribution, which was to say, as I recall, that he "hadn't foggiest idea" to the one question referred to him. Wim Kok could also have enlightened us rather more about his views on Shell in Nigeria instead of just referring us to the answer he gave at last year's AGM. And what is the point of having people like Christine Morin-Postel and Nina Henderson at the meeting if you don't actually ask them to say something? Presumably they were just passing go to collect their £200.

But it was Sir Peter Job who was the Non executive "star" of the meeting (I use the word "star" ironically). Job is on the Shell board with a primary role for overseeing the integrity of senior executive remuneration. Quite what qualifies Sir Peter for this onerous, but well remunerated, role is unclear but shareholders at the Annual General Meeting of Royal Dutch Shell had a good chance to see him at work on this subject. He bluffed and blundered to little effect and showed precious little understanding of the issues. There was absolutely no justification given for the scandalous "retention bonuses" and a series of oxymoronic non-sequiturs from the well-upholstered Job did not lead to one. The bonuses are designed to keep the three executives (Malcolm Brinded, Linda Cook and Peter Voser) in the company, but, Job assured us, they are all uber-loyal to Shell and have no intention of leaving. Hmmm! Work that one out!
And Job's justification for the fat cat gravy train was interesting (and ignorant) as well. He frequently mentioned Shell's record profits as a reason to reward the Board so handsomely. But, as any fule knows, oil company profits in the short and medium term are almost wholly dependent on the movement of the oil price - a factor over which no oil company CEO or Director has any control at all. Finally the revelation that the high-priced help got a substantial bonus despite not reaching their target to be number 3 in the multinational oil performance tables (Shell was fourth out of five) showed what a farce the whole thing is.
Sir Peter Job is the conscience of the shareholders as a non-executive Director in respect of the matter of remuneration. A huge number of shareholders have rapped him and Shell hard over the knuckles and many will now call for him to walk the plank.
Posted by Paddy Briggs at 10:06 am No comments:

The Tragedy of Corrib 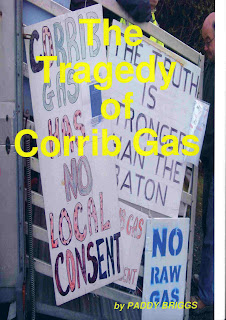 The Tragedy of Corrib
by
Paddy Briggs

“The Tragedy of Corrib” is a twenty page personal analysis of the main issues surrounding the controversial Corrib natural gas project in County Mayo, Ireland. The analysis is not a technical one but revolves around the management of the external and community relations aspects of the project from its inception to 2008. The report is a frank assessment of the mismanagement of some aspects of the project by Shell and others, which led to the infamous jailing of the “Rossport 5” in 2005. The report makes some recommendations as to how a resolution of the difficulties of the project might be achieved. Paddy Briggs draws on his long experience as an executive with Shell (37 years) and his specialist knowledge and professional understanding as a commentator on reputation and issues management.

To find out more and/or buy the book click on the button below:

Posted by Paddy Briggs at 6:34 pm No comments: 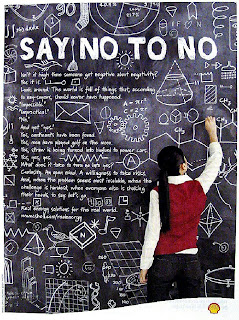 Sometimes Shell’s actions are so extraordinary that you wonder if the announcements that they make are a wind up – thrown into the ether just to see what might happen. The withdrawal from the “London Array” wind farm project is just such a decision. I know nothing about the business plan for this project except that I doubt that there were any “unknowns” which have suddenly become “knowns”. Indeed Shell’s statement that the decision is a consequence of an "ongoing review of projects and investment choices" suggests that they just went off the idea – as they have with so many other non traditional business ventures over the years. Shell’s definition of their “core business” becomes narrower and narrower over the years – step-outs into Renewables being walked away from with the same disregard for their reputation for veracity as many of the previous wimp outs.

As an ex-employee, pensioner and small shareholder I have consistently argued that unless Shell is really prepared to diversify into alternative energy wholeheartedly then they really shouldn’t bother at all. The track record of management success at anything but the oil and gas business is deplorable – so why bother? But as a commentator on brand and reputation management I find Shell’s mismatch between rhetoric and reality a continuing and monstrous disgrace. Remember the “Say No to no” ad shown here? I thought when it was launched a few months ago that it was deceitful, self congratulatory and facile. The wind farm decision is sadly not the only example which proves my point – what is Shell doing but saying “Yes to no” with this walk away from wind energy? But it gets worse.

The latest so-called “Shell brand campaign” featuring the disingenuous “Clearing the Air” campaign about which I have written before on this Blog is apparently a new initiative designed to communicate “What Shell stands for” - the campaign material states what this is:


SO WHAT DOES SHELL STAND FOR?

We are positive about energy
We are anti-complacent
We are creative, persistent problem solvers

So let’s take a look at the withdrawal from the wind farm project about which Shell UK Chairman James Smith boasted less than eighteen months ago: "The London Array offshore wind farm will make a crucial contribution to the UK's renewable energy targets. " Is this withdrawal being “Positive about energy”? Isn’t the abandonment of the project so precipitously extremely “complacent”? Can’t Shell be seen not as “creative, persistent problem solvers” but as mendacious knee-jerkers who when they encounter the unknown or the uncertain they run like hell for cover?

As I have said before I don’t really mind what Shell does as long as it is legal and in the interests of their stakeholders. What I vehemently object to is when they fail to walk the talk. When they promulgate bullshit in their brand campaigns about innovation and creativity when the reality of their business decision-making is anything but creative, original or innovative. It’s not the most elegant phrase to use but it seems appropriate – come on Shell “Cut the crap”.

Posted by Paddy Briggs at 11:05 am No comments: