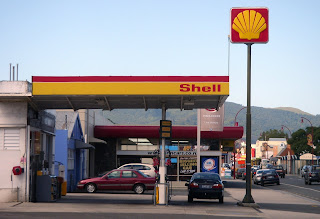 Shell’s Brand shame
By
Paddy Briggs
Take a good look at the photograph. What do you see? It’s a Shell petrol station, of course, and easily recognisable as such but when do you think that the photo was taken? If you said sometime in the 1970s or 1980s you would be logically correct. The visual style of the site is certainly that of an era some twenty or so years ago. Indeed professionals in the area of petrol station design, Shell brand management specialists and quite a few customers as well will recognise an identity from the past - one that was superseded by a new more modern identity more than a decade ago. But this is not an archive photograph – I took it a few days ago (April 2008) in New Zealand as I was driving to Auckland on the main East Coast road in a small town called Paeroa. Now you may think that it is a bit peculiar, even rather tragic, for an ex Shell executive, retired nearly six years, to want to photo petrol stations whilst on holiday in New Zealand. Let me explain.

For five years from 1990 to 1995 I was the project manager for the largest brand repositioning project ever undertaken in the oil industry. It involved the development of a new visual design system for implementation on all of the more than 40,000 Shell petrol stations in 120 countries. Research had shown that the then current design (known as VM2) was outdated and uncompetitive and that a radical redesign was necessary. This new design (called RVI) was introduced in 1993 and gradually implemented around the world over the next few years. Key elements of the new design included the representation of the Shell emblem (known as the “Pecten”) on a white background, the introduction of new colours, including a brighter and fresher red and yellow, and the replacement of the old logotype (the way that the Shell name is written on the canopy) with a much more modern font style. There was also a completely new signage and visual system which included a curved canopy edge and extensive new elements across the site. If you go to a Shell petrol station anywhere in the world today it is this new “RVI” design that you can mostly expect to see – it became the “new” standard fifteen years ago and was a significant success winning accolades in the design industry as well as boosting Shell’s competitive position significantly.

Back to New Zealand. As I drove around the country recently I realised that not only had RVI been implemented poorly with non standard design elements having been used (including a completely non standard “Prime sign” – the sign you see from the road) but that in many cases it had not been implemented at all – including the photographed site in Paeroa! What you see in this photograph is a site which conforms well to a design system (VM2) which was withdrawn fifteen years ago. The canopy, the way the “Pecten” is presented, the logotype are all from the 1970 – outdated, uncompetitive and long since not current as Shell’s brand identity. And this petrol station in Paeroa was not the only site of its type I saw in New Zealand – there are many others which sit firmly in the past. And it is not some sort of “heritage site” either – a deliberate and considered decision to keep a site in its old identity for nostalgic reasons. So what is going on? Shell might like to comment but I think that I can easily get to the heart of the problem without their help, but first why does it matter?

There are two inseparable aspects of the design/visual identity elements of a brand – they must be fit for purpose and they must be consistently applied. It doesn’t matter whether we are talking about a Coca Cola can or the livery on British Airways planes or the “Starbucks” brand name and colour system (or that of almost any other global brand) you have to get in right and you have to apply it with rigourous consistency. And when you change a design you have to apply the new design as quickly as possible and with a non-negotiable adherence to the agreed standard. In a company like Starbucks or Coke which are customer driven this happens without question – these great corporations wouldn’t be successful if the customer was not in the minds of everyone from the CEO downwards. But in the oil industry, and sadly particularly in Shell, this just doesn’t apply. Despite Shell being a huge branded retailer (there are more Shell petrol stations in more countries than there are Starbucks or even McDonalds outlets) Shell is today quite hopeless at brand management – scandalously so.

The Shell business imperatives are, as we know, not customer driven at all but are overwhelmingly concerned with exploration and production of oil and gas (the “upstream”). The board of Shell is rarely concerned with marketing matters and the customer barely gets considered at all at the top. Wade through Shell’s most recent Annual Report and see now much of the focus in it is on the customer or the Shell brand. Not a lot. Combine this with an almost complete absence of marketing experience and capability amongst Shell’s most senior management and an obsessive cost control mindset and you perhaps begin to understand how brand neglect of the type on view in New Zealand can happen. Join this to cost driven organisational changes which mean that key marketing decisions in respect of the New Zealand market are no longer taken locally but outside the country (in Australia and elsewhere) and you see that there is really no place in today’s Shell to apply the “All markets are local” imperative which all good marketers know to be true.

Branded marketing has always to be placed in a competitive context and it is important to record that in New Zealand Shell’s main Retail competitors (Caltex, BP, Mobil and local companies like Gull) look far better than Shell and certainly have more consistently applied visual identity systems. Shell’s appearance is shambolic and shameful – a disgrace for which there is no excuse and an insult to those of us who strived to give the Shell brand a global competitive edge all those years ago.

Finally let me say that whilst Shell New Zealand’s Retail network is a dire example of how a corporation that increasingly seems to have lost its way can utterly neglect some of its stakeholders (whilst, of course, proclaiming otherwise in its PR output) it is of course not the only one. I am aware that there are other countries where Shell operates in Retail where the implementation of RVI has been scrappy and incomplete and where the maintenance of good brand standards on site has been the victim of the application of cost minimisation mantras. I have argued in the past that the only solution is entirely to split marketing away from the rest of the Shell businesses and set up a completely separate Shell Marketing company which would be led by marketers, who know what they are doing, and within which there would be a culture which puts the brand and the customer first. Shell in New Zealand is a living example of why this is so necessary and what happens when the brand and the customer is forgotten.

An extended version of this article will be published in April 2008. For details please visit the http://www.brandaware.co.uk/ website.
Posted by Paddy Briggs at 7:32 am 3 comments: